SIGIL received an update yesterday and wadsmoosh no longer recognizes the wad (Sigil_v1_2).  Any plans for future support?

Yes, I've already committed a fix to the code depot and would like to have a build out soon. No ETA yet. The fix is simple enough you can apply it to your existing install with eg Notepad:

Oh, I see you're talking about simply the filename change. Rename SIGIL_v1_2.wad to SIGIL.wad and WS should recognize it.

Haha yeah, but I appreciate the quickfix too.  I wasn't even aware of that issue, so thank you!

is the LZDoom supported for this version?

How do i add master levels to doom_complete? i forgot how to do it. do i

Just copy ATTACK.WAD and the other 19 WAD files (Canyon, Blacktwr, Virgil, etc etc) included with the Master Levels into the same subfolder "source_wads" as you have doom.wad, doom2.wad etc, and run WadSmoosh. The window that pops up should show "The Master Levels" in the episode list.

oh i see, i thought i had to put them in a folder, opps. thanks. also, is there only 20 files for master levels or 21? i saw teeth wad is suppose to be a two part one? or no?

Also, can you make one for wolfenstein 3d and its 3 expansion packs too?

TEETH.WAD contains two maps, so yes it's 21 maps across 20 files.

i see thank you for your help:) cool project though, i enjoying it:)

Darn, good catch. Next version should fix this.

After I run the wadsmoosh.exe I can't seem to find the PK3 it's supposed to create. Should it be in the base folder?

Yes, all the IWADs are in the right place so I don't think that's the issue.

Do you see any errors in your wadsmoosh.log after running?

Look closer. It's in the same folder as wadsmoosh.exe and can hide in plain sight with how much is already in there

This was happening to me; I had to perform a search on the entire C:\ drive to find where they were being put.

Try looking in C:\Users\<windows account>\AppData\Local\VirtualStore\Program Files (x86) and you should see the name of whatever folder you created to house the wadsmoosh files

edit: right click the .exe, goto properties, select the compatibility tab, and check "run this program as an administrator". that should allow the program to write to the folder it's in.

This is SO COOL. I was just trying to put together my own SuperWAD that does this, but was failing miserably. Broken textures and whatnot.

Will this add Plutmidi.wad if it's put into the folder? Or do I need to modify and add it myself?

Also a version that turns it into a standard iWAD instead of a PK3 and without ZDoom stuff so that other source ports can support it would be cool. Although that's simple enough to do with SLADE, it would be cool for this to become the equivalent to Doom 64 EX's WADGEN and Complete becomes the defacto Doom iWAD for every source port

You should be able to make a WadSmoosh-compatible version of plutmidi.wad by renaming all the lumps inside to P_TRACK instead of D_TRACK.

What WadSmoosh produces is an IWAD, PK3 just denotes the format used (ZIP instead of the classic WAD format).

Much of what WadSmoosh does, with regard to defining custom episodes, intermission screens, and texture replacements is due to ZDoom functionality that most source ports don't have. If there's a source port that has equivalent features (maybe Eternity?) and someone wanted to make a fork (not a branch) of WadSmoosh that produced an all-in-one IWAD for that, they'd be welcome to - WadSmoosh's code is released under an MIT open source license - but I only use GZDoom so that's all I'm willing to support.

That makes sense. Anyway, the point I was attempting to make stems from wanting (near) universal compatibility with this. No PK3 format, since many source ports can't handle the zip format, or Mapinfo, since that would be the job of the sourceport. But, if that isn't your goal, then that's just the way it is.

However, do you think that future versions could add in device-exclusive official maps? Sush as by extracting the maps from the GBA ROM and PSX ISO? That's st least in-line with the goal of the project.

PSX, GBA, Jaguar etc versions of maps already exist as freely available (painstakingly manually reverse engineered, as I understand it) PWADs, so I'd say just run those as mods.

Why my episode screen (above) is not like yours with orignal red and big font? 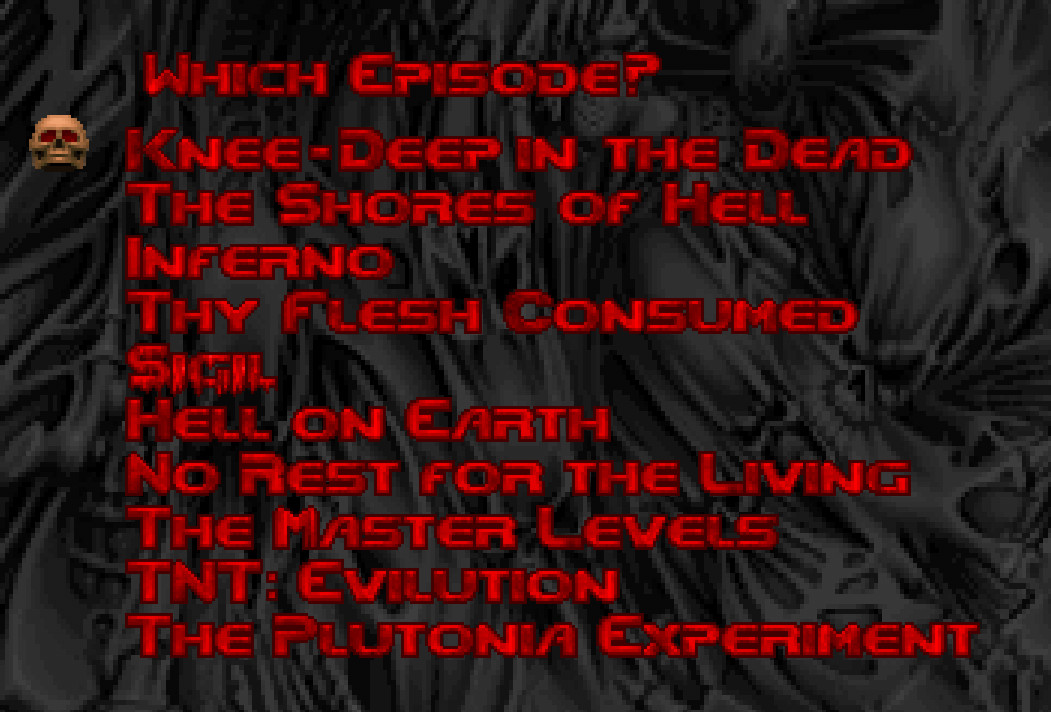 Thank you and congrats for your great job!

Would it be possible to make a wad like this for Crispy Doom?

Unfortunately no, much of what WadSmoosh does is only possible thanks to various ZDoom-only features.

Is it possible to have them all be run in sequence, without episode skips?

I made a mod for just that! https://jp.itch.io/doom-fullrun

Great utility that makes it trivial to play the official Doom maps, especially Master Levels for Doom II, which was a hassle to get to work in a source port, and works as it should (starting out with only the pistol on each level).

It even incidentally let me know about a Doom campaign that I had no idea that I owned, No Rest for the Living, which comes with the Doom 3 BFG edition on PC.